The sunset painted the proud castle walls a fiery red and the clash of swords under the battlements sounded like Vespers. Down at the seaport of Glaretza a slight Levant wind whispered through the ruined towers as they kept their eternal vigil over the sea, awaiting the forgotten shapes of war galleons and merchant ships to appear again in the bay. A little further to the south, a humble piece of land, full of avocado and lemon trees, waited to live its own small, insignificant, everyday stories. How can a lens capture such beautiful pictures? How can a camera depict the magic of sounds and feelings?

Impressed, lucky spectators and witnesses of the 4th Medieval Revival Festival at Castle Clemoutsi, Angela, Vicky and Spyros thought that all the members of the Greek Tolkien Society should experience this dreamlike ambience. Rashly, without much consideration, they promised Vassili –the head of the group Ritter Hellas- that the Prancing Pony would gladly participate in next year’s event with many of its members. They truly believed it would be so, even though they hadn’t asked anyone. As soon as they could, they presented their idea to the Assembly and it was met with great enthusiasm. Then, we all had to wait for almost a whole year to pass. In the meantime, everyone started preparing. People declared their participation, brought out their best period clothes or had new ones made. Shirts turned to tunics, tunics were adorned with fine tresses, curtains were turned to long flowing sleeves, headdresses, armguards and belts were fashioned, weaponry polished. The humble rooms under the avocado trees were booked, and car-pools and room-mates were organized. Our fellowship was preparing to embark in yet another adventure.

Finally, the 6th of June 2014 arrived and the trek begun. The almost 300 kms to our destination were covered in various times of the day and different speeds but we all 23 of us were there by early evening, hungry and a bit tired but full of joy and good spirit. As soon as we were settled in our rooms, we proceeded to the hospitable village of Kastro, which nestles under Castle Chlemoutsi. The streets and the square were quiet, seeming to hold their breath in anticipation of tomorrow’s happenings. We met our hosts, the people of Ritter-Hellas, many of who are old friends and common members in both Societies, and together with representatives of the village council we sat down to dinner and a discussion of next day’s program.

This Saturday morning’s wakeup was one of the sweetest. Coffee and breakfast under the shade of the trees, around a huge central table, with friends. What better? After that… the Middle Ages. Although it was to be a hot summer day and the events of the morning were not formal, most of us put on our costumes (or the lighter ones), took our gear and were on our way. The rest acted as photographers and “squires”, carrying purses, glasses and bottles of iced water.  We gathered at the main square. From all the side streets people started to immerge. Knights, damsels, gentlefolk but also commoners came to enjoy the site.

Then the pipes and the drums gave the tempo and we started for the Castle in procession. At the head were the musicians and the banners of the various Orders: Teutonic, Templar and Order of St. John. Behind them came the noble folk, knights and archers and ladies. Slowly we approached the stately Main Gate, which opened to receive us and let the Castle relive its days of glory.  The perfect little Museum in the Keep captivated us with its nicely displayed treasures and transported us back to times of the Villehardouins and the Paleologoi.  The people that had followed us showed great interest. Some were local but many were visitors and tourists from the nearby beach resorts that had heard about the event. Seeing our attire, they considered us experts and showered us with questions about the castle and its history.

Many wanted their pictures taken with the knights and ladies. The children were especially impressed by the weapons and in all their innocence asked to touch the wondrous swords and spears and bows. Even the local reporter of the Public television appeared and interviewed many of the participants. But the heat was rising fast and many of the noble ladies (and not a few brave knights) started to feel uncomfortable. So we referred everyone to the evening’s bigger festivities and departed for some deserved refreshment. Our group split up. Some went swimming, some napping, some cooled off in the shade talking. But all gathered for a late lunch of tasty dishes and cool beer in the “Sea Garden” at Kyllini Harbor. Then back to our rooms for a quick shower and in our costumes. 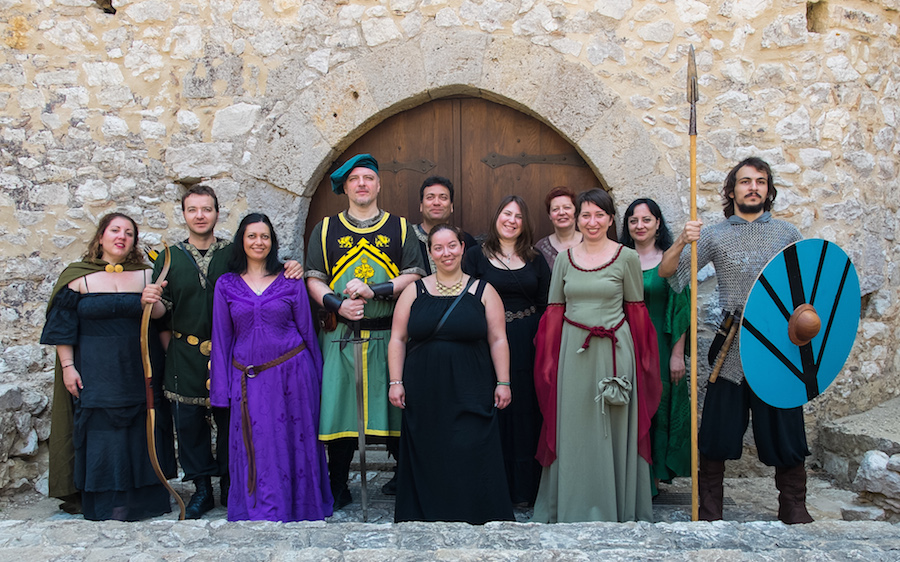 The time was at hand. It was the slow arc of the bright sun towards the cool blue bosom of the Ionian Sea that proved it. We gathered our capes, climbed into our metal coaches, turned our backs to the sunset and in a long line ascended again toward the village of Kastro. There was a brief moment, when our trajectories met and in that instant a blinding, golden flash enveloped us. Thus we passed through the gates of time.  The village was quite full. Knights, now in full armor, ladies with their evening finery, a fist of young archers, a small host of riders on their proud steeds, smiths with their leather aprons and heavy hammers, even the town henchman with his long axe. Bright colored banners, beautiful dresses, shining armor, voices, laughter and anticipation. The same anticipation as the one the people felt on the year of our Lord 1262, when the whole Princedom of Achaia was standing right on this square. It was three years after the “Black September” of the Francs, when riders had brought the bad news from the north, first to the capital city of Andravida and then here, to the impregnable Castle of Clermont. Guillaume II de Villehardouin was defeated by the Byzantines. Three years later Chlemoutsi Castle surrendered to the victors. Everyone, simple folk, noble Byzantines and Latin Knights all gathered here for the big moment.  It was an afternoon exactly like this one, when the big procession started for the walls. Noise, music, excitement and the tempo given by steel shod feet on hewn stone. The leaders of the two factions, together with their captains, passed to inner court were the surrender was completed. The populace remained in the huge outer area between the two massive rows of outer and inner battlements.

Just as they did, so our followers found seats on the warm stones of the small amphitheater and waited to hear the end of the story. Only it wasn’t a page that brought the news but our own Lady circi who span the tale of the castle and told of the legends that surround it.  And it wasn’t a surviving veteran who described the Battle of Pelagonia, but the stentorian Stefanos from the Koryvantes Society. And the battle worn knights, who demonstrated their considerable skills in tactics and movements, weren’t Francs or Byzantines but members of Ritter Hellas. 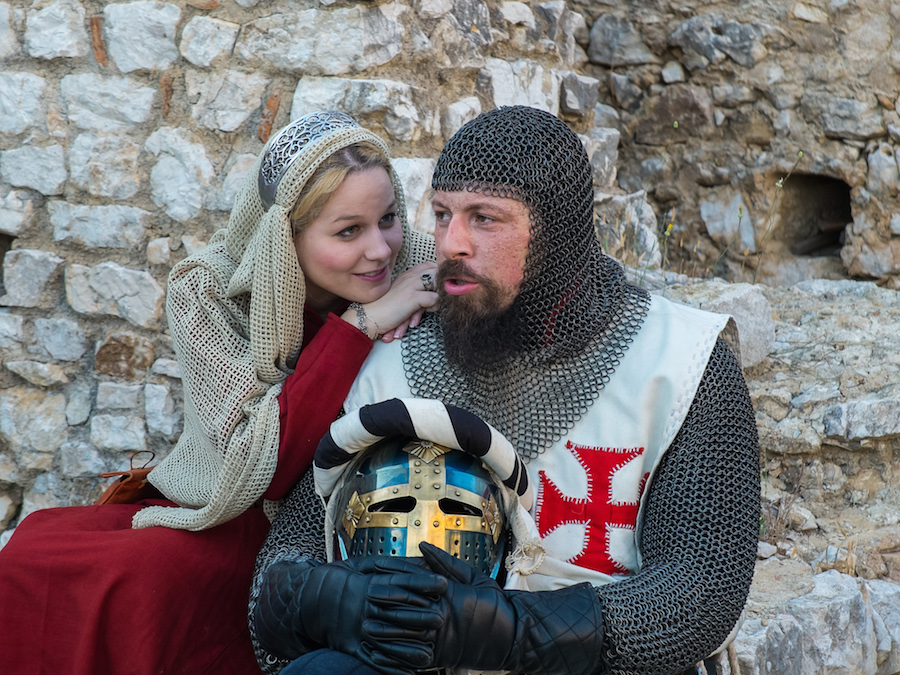 The time passed, the sky turned red, the heat had reached “boiling point”, yet no one left till the final sparring was complete and then they clapped and cheered so loudly they could be heard across the sound to the island of Zakynthos. Then the cry went up: “everyone to the main square of the village for the celebration” and people started pouring out of the gates. This melee was the perfect opportunity for the wicked ones, like this airy shadow in brown robes that so lightly “unburdened” a purse of silver Tornese coins from my belt. Luckily, I felt it immediately and gave chase down the broad stone steps of the castle, shouting “Thief”, “Catch the thief”! Vassili and his knights were quick to grab her, before she was lost in the crowd. They shackled her and gave her over to the executioner.

People started moving aggressively toward her, their feelings running high. But the swords and daggers of the knights kept them at bay. With lighted torches we formed a circle around her and started the descent to the main square, led by the bagpipes and the drums and followed by a fiery river of oil lamps and candles held by our ladies and followers. As the public humiliation of the thief continued through the village streets, the negative feelings seemed to dissipate and calls for forgiveness started to be heard. At the square, the new Byzantine Governor decided to make a positive start and made to the girl a gift of her freedom.  This was accepted with loud cheering and immediately a ring of torches and lamps was formed, in which appeared our Agatha, like a mythical faerie and as the music swelled she started a magical dance.  After a while the people joined her and beautiful pairs were soon dancing the pavana. The nearby taverns started to fill and the guests were offered some of the best food and wine of the area. Slowly the torches burned out and our group gathered at a friendly inn to continue the celebration in our own “hobbity” way. Much later, as we descended towards the coast, a sea breeze arose and caressing us erased all the glory of the revived past and brought us sadly back to today”.

We stayed in the cool embrace of the avocado and lemon trees one more day, discussing our great medieval experience over iced coffees, juices and cold beer and regaining our strength for the long drive back thanks to a perfect barbeque organized by Vassili, Gianni and Pano. Before we departed, we strolled through the remnants of the once great fort of Glaretza. It was right after a sudden summer rain and the smell of wet earth mingled perfectly with the sea brine. Richer in experiences, fuller of colors and sounds, more complete through meeting many new interesting friends, we started on our way.

The 5th Medieval Revival Festival at Chlemoutsi Castle was held on June 7th-8th 2014. We thank the authorities of the Municipality of Kastro and the members of Ritter Hellas for the kind invitation to join this great event and experience unique moments, as well as the special mention of our Society’s participation in all publicity.  We also thank Roula and “George” for their special avocado-land. We hold onto these precious moments and already dream of our next meeting in Medieval Times.